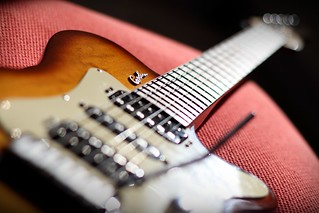 “You hit it, you know, you don’t blow it you don’t bow it; you pick it up and use it almost like a weapon”

The quote above is in reference to guitars, and the emotion and feeling they can exhibit. In most rock songs and songs where guitars are being used in this way, there is a riff that the song is built around. “Johnny B. Goode” by artist Chuck Berry is the song that sprung the guitar riff into the mainstream world of music in the late 1950’s. Before that, rock and roll music had been built primarily around the piano.

Around that same time, a similar occurrence was emerging from the rebellious side of American teens. This was led by Link Wray, whose music created such a sense of rebellion and menace that his instrumental “Rumble” was the first instrumental banned from the U.S. radio. Although this was the start, it spread fast and not just in the U.S. but the U.K. also. Hank Marvin was an influential idol in the world of guitar riffs. In 1960, he led the movement of clean guitar riffs in Britain.

However, to display the angst felt inside, people began playing guitar and guitar riffs much grittier and dirtier than what was used to and know before. Dave Davies as a 17 year old boy ended up changing the world of guitars in rock music forever. “You Really Got Me” by The Kinks is a prime example of the new use of gritty guitar riffs in rock music and it was a hit almost immediately.

The riff that sparked the start of heavy metal was a very simple three distorted chord progression made because of an accident to a sheet metal worker and aspiring blues artist. These chords were banned almost everywhere because of the tension and darkness they seemed to possess, although that was not the intention at all of the artist who came up with it; Tony Iommi from Black Sabbath.

In 1975, Queen created one of the most unique and one of the most genius songs in rock music: Bohemian Rhapsody. It was a rock song with unique guitar style and operatic elements – something nobody had heard before. It was also one of the most riffs in its history. Originally it started on the piano, but when played on the guitar evoked a different feeling Freddie Mercury wanted to display in his song.

The same year, Joan Jett with her guitar set out to challenge the gender stereotypes in the rock and roll world. Although no one had made rules against women being in that type of industry, many were taken back by The Runaways taking the stage. Jett saw that there were no women doing what she wanted to do, and if she wanted it then there had to be many others just waiting for their chance. She recruited Lita Ford, Sandy West, and several other females that came and went during the band’s lifespan. Finally, riffs and rock music trapped inside the creative minds of women were able to be released (even if it came with hate from the male crowds).

All this and much more is in the history of the guitar riff, including the spark of a technique called ‘chucking’ used in many genres of music like disco in the late 70’s. Then more melodic guitar riffing in the early 80’s, which created a movement of anti-rock and indie music with guitar riffs led by Johnny Marr of The Smiths. This continued onto alternative rock bands with guitar riffs under the radar with bands such as My Bloody Valentine. Through it all, it seems evident that the guitar riff will always be popular.