You may have seen my last post “Melody Recording Project’ where I created a melody after learning about the structure of what goes into making a melody sound good; this post, we decided to take it a step further. This time, I made a melody and then added harmonies and background chords. This melody is a little strange as the phrases aren’t really repetitive but instead the period repeats every few measures and has more awkward rhythm. Then the chords in the background push it along and add more emotion to it. This is what I came up with in the end. 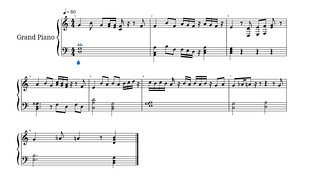 For my harmony, I was more focused and playing with the harmonies so my melody is pretty inconsistent (sort of like an off-beat Lana Del Rey song that only really muscially make sense when it gets to the chorus, except that it was made in flat.io). At first my focus was finding chords in the background of each measure that would push it along. For about every other measure, I took the first note of the measure (usually the tonic or mediant and submediant notes) and I went a third of the way up and placed a note, and then a third of the way down and placed a note. For the other measures, I only went one direction, or I did the high and low harmonics without the same note being replicated. In the first phrase I also played with having something in the background that only lined up in harmony with the melody every few notes. For the second phrase, the melody needed to be focused on, so I just added some background chords to keep it simple. I tried to also do some “ask and answer” sounds with an echo of the same melody a few keys lower and such like that. I tried to build and release some tension by adding a few dischords before triads. Some stuff sounded good and some didn’t sound that great. I picked from the good sounding harmonies and added it to my melody and overall I’m happy with the results. It is in the key of E.

harmonics – hidden notes behind the fundamental note, like all the hidden color in white light

triad – a fundamental note with the two harmonic notes supporting it

polyphony – intermingled harmonies that mix with the melody to harmonize

dischord – a harmony of notes deliberately from the wrong triads

dissonance – lack of harmony; a noticeable clash in notes

suspended notes – letting a note linger over a chord it doesn’t belong to creating a sort of tension; usually only correcting itself at the very last moment

What I Learned and Problems I Solved

After I had created my melody, I really enjoyed it, but the rhythm was one that was very hard to work with. I had to play around with the notes in the third and fourth measure a lot until I could imagine a good sound to add in. After the melody was produced, I heard that it sounded very chipper, and although I loved the melody I was going for something a little more heartbreaking or nostalgic. I added some more minor chords underneath to try and get this affect. This sounded good, but the strange rhythm still didn’t seem to make very much sense. Finally, I added more ‘fun’ behind the melody, almost like a backup melody that was harmonizing with the first one in lower tones. This gave the song a sort of fighting element, like the harmony was competing with the melody. This was also cool, but not what I was ultimately going for, so I kept background chords in some measures and kept the echo-like harmony in others. In the end it sounds like a great motive, but it needs more to become a complete theme and make sense with itself.