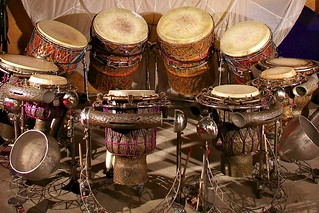 As humans, we one of the only animals in the world that can hear our mother’s heartbeat in the womb – the first rhythm we ever hear. This could be why we are also one of the only animals that like to dance around and create new kinds of music. The heartbeat is not only in ourselves, but in music. The pulse is a heartbeat-like repetition with the same periodically timed beats. All songs have a pulse, whether you can hear it or not.

Beats are often divided within themselves into two or four mini-beats. In theory, though, they can be divided however you want to. Waltzes are examples of beats divided into three’s, with a 1-2-3 repeat loop.

Accent is the stressing of certain notes to put emphasis on it. Humans do it naturally, imagining an accent on any beat even if every beat is exactly the same. Composers in the past have always been experimenting with changing and shifting accents within songs and melodies. Humans also very much like syncopation, which is playing or singing off of the main beat. Syncopation became famous during the rise of playful jazz, but it’s been around a lot longer. Good uses of syncopation make the music sound more like a human made it and less like a song made by a machine with rules and harsh regular beats.

Rag time music was birthed out of an artist trying to imitate marching bands on the piano; on the left hand there’s a beat, and on the right is the main melody and harmony covering up the beat and in between. However, it was not until Jazz and Swing music that syncopated music didn’t still have rules on how to use it. In Swing music, the syncopation is lagging just a little bit behind, bringing a mischievous cheeky feel to the song.

During this same time in Cuba, a new type of song emerged that inspired many different types of dance. Cuba took aspects from all of the techniques we’ve talked about and put them altogether with aspects from their own music. This made a very fun sounding and almost sensual genre of music. In Jazz music, the syncopation is holding the beat behind, in Cuban song the bass line and melody are both going slightly faster, anticipating the beat.

This is only a glimpse into the world or rhythm, beats, syncopation, and even more. However, after learning the basics, you may already start to notice these techniques in your everyday music and life.

Watch ‘How Music Works with Howard Goodall – Rhythm’ on YouTube