We’ve made melodies, we’ve made harmonies, but something that is behind the majority of popular music that we have not practiced making yet is a beat. More specifically, this project we used free online resource to make a rhythm you can tap to. First we looked at songs like ‘Superstition’ by Stevie Wonder with great drum rhythm examples that push and move a song. Then I went onto Drumbot to create my own original beat. 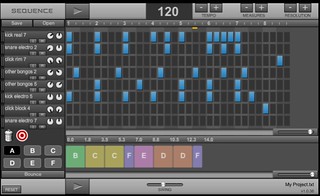 I wanted to make a beat similar to most of the intoxicating sounds I hear in a lot of the alternative and calm electronic music I listen to (think ODEZSA, Hippie Sabotage, The Acid). I wanted to find some interesting sounds and put them together with a basic beat and I knew that at the end of the eight measures I wanted a small beat drop with a single click-type sound. I started by setting up all the sounds I wanted in my beat and then I set them down one by one, slowly modifying each so they would fit with each other. When I finished my sound, I wanted to add another element that I had discovered on this software earlier. I made the two different pitches of bongos in two different ears. Although not directly noticeable, if you listen closely you can hear one bongo sound (labeled in the screenshot as ‘other bongos 2’) slightly more in the left ear and another bongo sound (labeled ‘other bongos 5’) more in the right ear. Then with the final click and rim shot at the end of the 8 measures I did the same thing but stronger – the click was only in the left ear and the rim shot only in the right. Even though the final beat isn’t exactly as “intoxicating” as I’d hoped, I’m definitely surprised by how much small elements affected the overall quality of the beat.

Beat – The beat or PULSE in a piece of music is the regular rhythmic pattern. Like the beating of your heart; heartbeat.

Tempo – The SPEED at which a piece of music is to be played.

Accent – The STRESS given to a musical note.

Duration – The period of TIME during which a musical note is HELD OUT.

Meter – A specific rhythm determined by the NUMBER of beats AND the TIME VALUE assigned to each note.

Syncopation – The musical rhythms in a piece of music that accents a normally WEAK BEAT (off-beat/up-beat).

Duple – When the meter of a piece of music consists of TWO BEATS per measure/bar.

Triple – When the meter of a piece of music consists of THREE BEATS per measure/bar.

Quadruple – When the meter of a piece of music consists of FOUR BEATS per measure/bar.

Accelerando – A gradual increase of tempo in a section of music.

Ritardando – A gradual decrease of tempo in a section of music.

Rubato – A flexible tempo in a section of music.

Before this project I had only ever played around in GarageBand, but now that I have these new resources and tools I know I can do so much more. My favorite part of my rhythm was the bongos being mixed with a basic electronic beat and the fact that if you put headphones on, each ear will have a different experience. I had some trouble exporting the file from Drumbot, and I had to look up helpful tips about the software, causing me to learn a lot more about the software than if I just played with it with no background knowledge. Now that I know how to use it, I’ll be able to use it more often and effectively in the future. The final rhythm I created I am happy with, but I know that I’ll create more in the future that can stand alone even stronger.